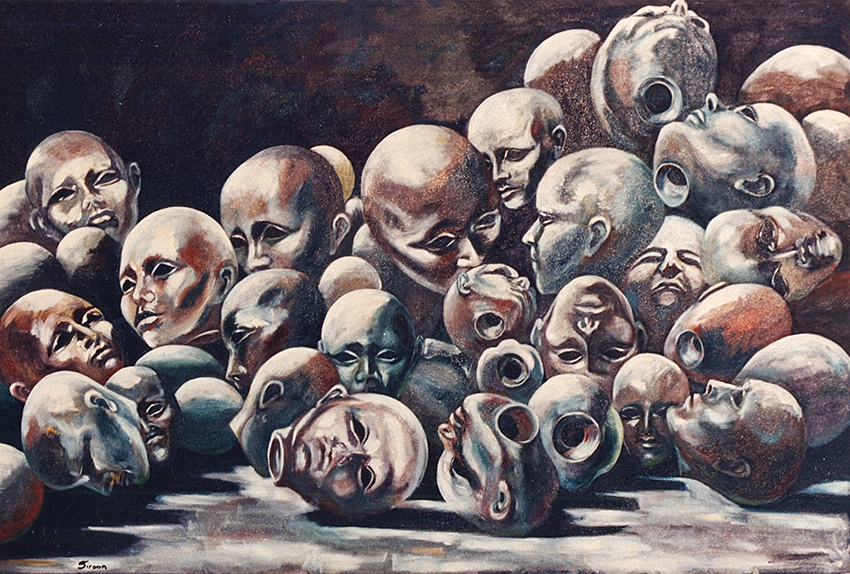 Seeroon Yeretzian: "The millions of Armenians that were killed in the Genocide were treated like objects that could be disposed, literally Turkey's intention."

Krikor Momdjian: "Like an open book, we see on one side a photo-document in which we witness how in a barbaric way Armenians were slaughtered in 1915. I did not want to paint the image but used it as it is - an horrible evidence. When I saw this picture for the first time as a little boy, I was choked that human beings are capable of such acts. History seems repeating itself as we think about what is happening now in the middle east, not far from Anatolia, where the massacres of Christian Armenians and deportations occurred. But I believe we can change this, for the sake of future generations, by education and information in healthy thinking. showing empathy for other people and cultures to create a better world."

Decorative wholeness and the rhythmic balance of the painting “work” for the length of contemplation. The width of panorama, dynamism of the painting’s platitude helps raise above yourself and the reality. There is a sense of length of the space in depth through the contrast of the multi-scaled color platitudes. The mountain, as a penetrating symbol - is a witness of the Armenian Genocide in 1915 - very similar to the motive of flood: it reaches to the almost universal scale. And this is the aesthetic viewpoint of the artist.
view more
share your arts
Here, you can upload your artwork dedicated to the Armenian Genocide. The uploaded artwork will be published in the
SHARED ARTS section.
Note: the site carries no responsibility over the copyright genuinity issues in the SHARED ARTS section. But still if you come across possible violation of copyrights, please, do not hesitate to contact us via [email protected] email address.